This year, Dynamsoft’s Vancouver team substituted the beaches of Mexico with the beautiful mountains of Alaska. Taking off from Vancouver the morning of August 25, the team was set to enjoy a relaxing Alaskan cruise aboard Holland America’s Nieuw Amsterdam. Not all activities were restricted to the ship though. With stops at 3 major Alaskan cities, the team caught a glimpse of Alaskan culture, history, and wilderness. 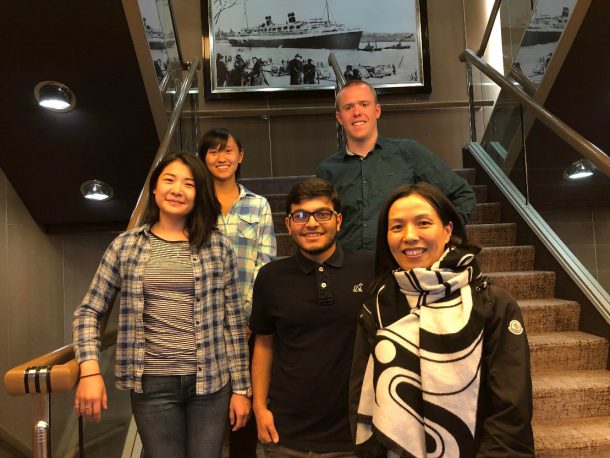 As first time cruisers, it was hard not to take notice of the ship’s size and pomposity. The ship conveys a sense of Dutch luxury through its furnishings and art installations. The cruise started with a scenic cruise of the inside passage on a lovely, sunny day. Simply sitting on deck by the outside pool was enough to expose you to some of the most beautiful mountain ranges that I have ever seen.

The first day of the cruise was spent on the ship, giving us ample opportunity to explore all the ship had to offer. The Nieuw Amsterdam is home to a number of unique entertainment options, spanning various forms of art and music. With the entertainment facilities inactive during the morning, we spent some time looking through the various facilities, namely the Mainstage, the Billboard bar, the Lincoln stage, and B.B. King’s Blues Club. After exploring the different facilities, we spent some time cooling off in the outdoor hot tub and taking in the views. As the sun set and night settled in, it was time for Gala Night. The ship gained a sense of liveliness, which was definitely felt as you walked around and saw everyone dressed to the nines. We had a most fantastic dinner prepared by some of the most renowned chefs of the sea at the luxurious Dining Room, and later experienced encapsulating live music that spanned classical, jazz, blues, rock, and pop. The first night at the Mainstage was graced by an amazing performance where the dancers and singers of the Nieuw Amsterdam depicted different elements of nature through song and interpretive dance.

Monday saw our first onshore excursion in the city of Juneau. Although being a remarkably hilly city, walking through the different buildings, shops, and historical landmarks of the city was both fun and insightful. After our trip onshore, it was back to the ship for some dinner at the Dining Room, followed by a fantastic live show at B.B. King’s Blues Club.

Tuesday marked a new day, and a new onshore excursion trip. After having some breakfast, we headed into the town of Skagway. Much smaller than Juneau, this town is home to a population of only 800 people! I loved its quaint atmosphere, the bright, colourful buildings, and its old-town appearance. The town was able to truly make you feel like you were walking the streets of Skagway during the 1890s. My favourite landmark is this saloon that used to be a meeting spot for people of the town, as well as an exhibition venue for Jefferson “Soapy” Smith, one of the most notorious con artists of the Old West. 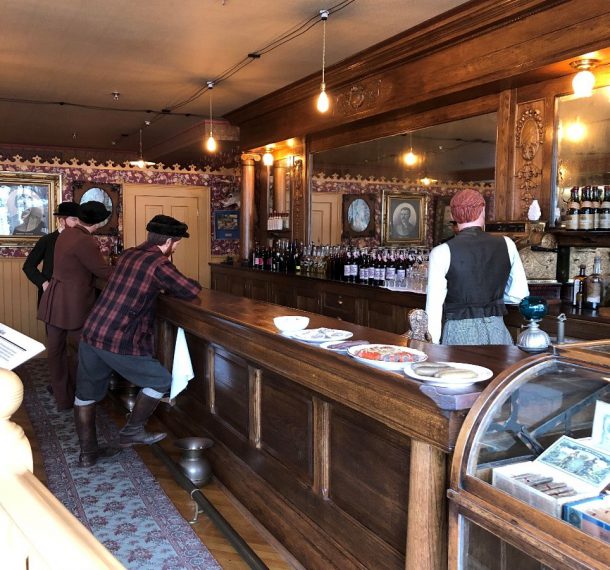 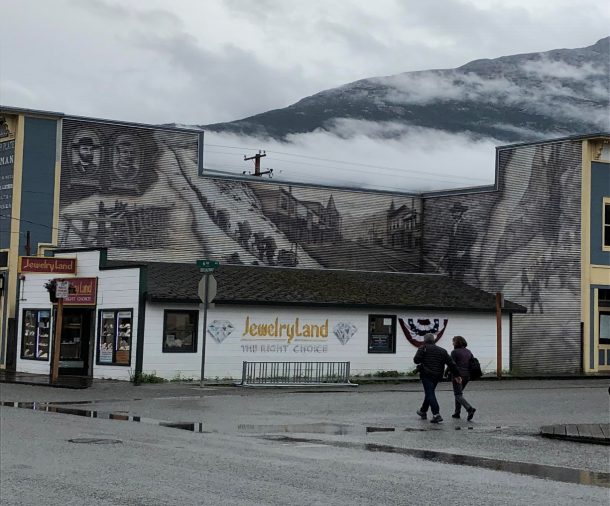 From the dawn of Wednesday, we cruised down Glacier Bay and were treated to magnificent views of the glaciers all around us. The ship had some park rangers onboard for the day to talk to guests about the national park and its ecosystem. Fun fact: Alaska has more glaciers than anywhere else in the world! After an incredibly scenic cruise-by, it was time for guests to get ready for the second Gala night. The dining menu seemed to get better with each day, keeping us refreshed and hungry for more. The second Gala night was highlighted by the Billboard Mainstage show. This show had the dancers and singers of the Nieuw Amsterdam perform incredible renditions of some of the most popular songs from the 1970s forward. 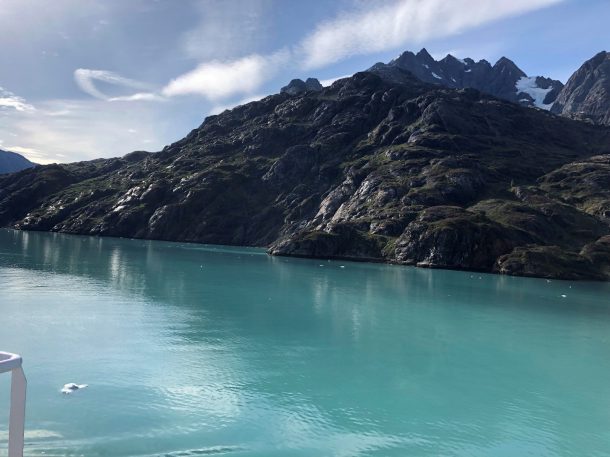 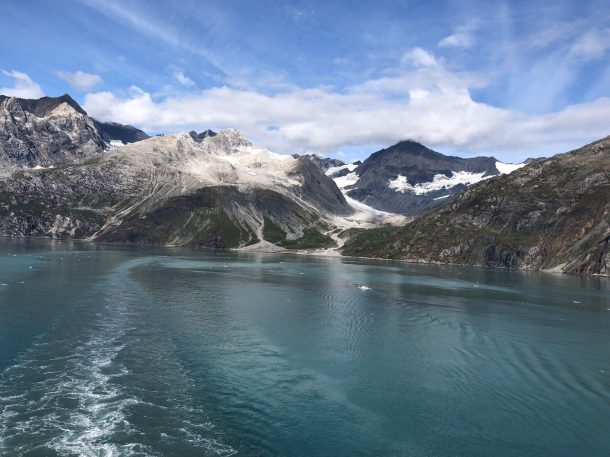 Ketchikan was the last onshore excursion city of our trip. Much larger than the two other towns, Ketchikan was bustling with people, from locals going about their daily routines, to other cruisers. After spending a nice day in the city, we headed back to the ship to catch some dinner and the viewing of ‘Alaska In Concert’. This show blended wondrous Alaskan nature film with live music, adding a new dimension of beauty to the Alaskan wilderness. The film was shot by the amazingly talented team at BBC Earth.

Just like that, it was the last day of the cruise, a day spent entirely for relaxation and some fun team games. We partook in the team trivia challenge, which was fun and exciting. Unfortunately, we did not win the challenge, but we did learn that tug-of-war used to be an Olympic sport (my guess was hula-hooping). After enjoying our last dinner of the cruise, a night of Latin dance, live blues music, and piano performances awaited us.

All in all, the cruise was very enjoyable. We got to experience Alaskan culture and wilderness, and learn about what makes Alaska “The Last Frontier”. Although we would’ve liked to see more bears, we saw our fair share of bald eagles, which I personally found rather exciting. Our stay on the ship was fun and invigorating, thanks to the incredibly friendly and professional crew of the Nieuw Amsterdam. I hope you enjoyed this short account of our adventures. 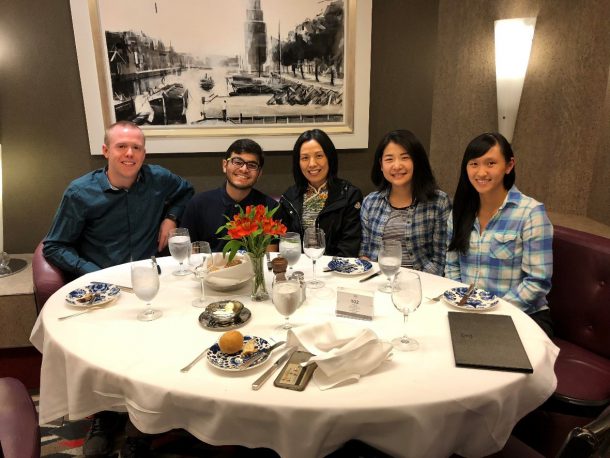 Till next time,
Amro